Get your tickets here (link opens in a new tab)

Since 2005, the Comedy Club 4 Kids has been getting the best stand-ups and sketch acts from the international circuit to do their thing for an audience of children (aged 6+) and their families… but without the rude bits! This year’s show will feature comics Stephen Halkett, Rosco McClelland and Mr Fibbers.

School teacher by day and comedian by night (or indeed, in the daytime for us), Glaswegian comic Stephen Halkett can turn any gig into a massive party, with games, dancing, jokes, and quite possibly the odd bottom burp sound! Fun and nonsense abound with this former Musical Statues champion.

Comedian of the Year Rosco  McClelland is hotly tipped as one of Scotland’s brightest stars, with bags of potential and professional accolades to prove he is one to watch. His wandering mind, which onstage concocts strange and surreal tangents and observations, has been put to great use on Twitch over lockdown, where his comedy streams have gained a cult following.

Glaswegian guitarist Mr Fibbers is a comedian and musician, specialising in comedy songs to have the young minions AND young at heart grown ups laughing and bopping along in a crowd. With his love of ninjas in pyjamas and the music of Queen, Mr Fibbers knows how to get the party going. He has an album of child-suitable funny silly songs out on iTunes, called Back In Tune. 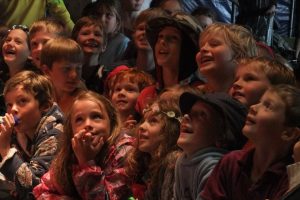