Emerging from the ashes of various bands in the Edinburgh music scene, Retro Video Club (Kieran Burt, Sam McGil, Michael Ward and Liam Allison) first started jamming together in 2015. After taking some time away to refine their sound, the group released their first proper single in 2017. ‘Psycho’, a rough-and-rowdy slice of indie rock, was instantly picked up and playlisted by Spotify.

Capacity gigs followed across Scotland, while festivals, support slots and European shows came thick and fast in 2019. The band also announced their first headline tour of England for March 2020.

Like most bright young things, COVID stalled Retro Video Club’s momentum – but never ones to be defeated, the band turned their attention from stage to studio. As it stands, they’ve got a year’s worth of music ready to go. While earlier material was inspired by Green Day, The Enemy, The Strokes and early Arctic Monkeys, “the new material is less confined by being a four-piece band. We’ve held back less,” says Michael who explains how Retro Video Club “are not just trying to sound like a rock band.”

This new chapter of the band sees them less talk, more action – and you won’t want to miss them at The Spree this October! 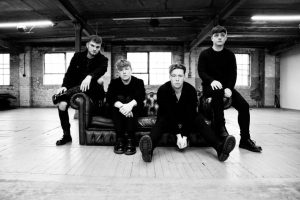 We’re looking forward to welcoming you to The Spree 2021.

We’re in a new location this year on Bridge Street, Paisley, which gives us more space. Use this link to find us.

We’ve got a reduced capacity in the Spiegeltent this year. We encourage everyone attending to respect others, practice good hand hygiene and wear a face covering even entering or exiting the tent, going to the toilet or moving around the tent.

We’d also encourage you to take a Lateral Flow Test (LFT) prior to attending a show.

The Spree festival uses the Check In Scotland service to collect contact details of visitors, customers and staff. This allows NHS Scotland’s Test and Protect service to conduct faster contact tracing and help stop the spread of Covid-19.

You can quickly and securely provide your contact details by scanning an official Test & Protect Check-in Scotland QR code poster via your smartphone camera or by downloading the Check in Scotland app. You’ll find posters with the QR code at the entrance to the event space. If you’re unable to use the app, your personal details will be taken manually.