Paisley came alive with festival fun as the opening weekend of The Spree brought thousands of people into the town centre.

The bulk of the action for the nine-day event (11-19 Oct) is taking place in the stunning Salon Perdu Spiegeltent in County Square, which has made a striking setting for the shows so far. 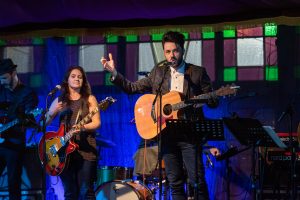 The festival got under way on Friday night with a very special tribute to Paisley-born songwriting legend Gerry Rafferty.

Scottish singers Roddy Hart, Emma Pollock and Rab Noakes captivated a sell-out crowd with a set spanning Gerry’s rich career, and brought the Spiegeltent crowd to its feet as they closed the show with two of his best-known songs – Baker Street and Stuck in the Middle With You.

Friday night also saw late-night comedy laughs from some of the best acts on the Scottish circuit, compered by Fred MacAulay and rounded off by headline act Mark Nelson.

Saturday saw an all-day mod-fest in The Spiegeltent with ModStuff – run by LNP Promotions. A free charity afternoon show saw the spectacle of more than 100 scooters riding off around the town, before the packed evening show saw Paisley Pattern aplenty as a sharply-dressed crowd danced the night away to a set of 60s mod and soul classics. 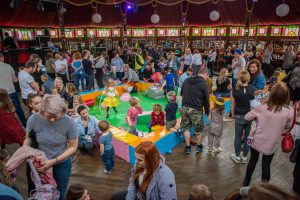 The week also includes the Wee Spree programme of kids shows – with Saturday morning engineering some robotic fun with Computer Explorers, while on Sunday toddlers got their chance to take to the Spiegeltent dancefloor with Mini Manouvres.

And on Sunday night the rising stars of Scottish indie-rock The Snuts had a packed-out Spiegeltent bouncing for a lively show including a cover of These Streets by Paisley’s very own Paolo Nutini.

Anybody looking for something to do with the kids during the October school week can check out the programme for The Wee Spree – which offers everything from dancing to Disney to comedy to Lego to baby disco.

The Spree is run by Renfrewshire Council, programmed by Regular Music, and sponsored by Tennent’s Lager

JUST ANNOUNCED: Another great addition to the line-up! 🔵 @horsemusic - Thursday 8 September Tickets on sale NOW from our website ➡️ orlo.uk/nVm2D Or from festival box office at InCube Shop, Paisley. pic.twitter.com/olBXyUCGjX

Tickets for these shows are ON SALE NOW! 🔵 Sunday Jazz Brunch with @roseroomuk – Sunday 4 September 🔵 @BootlegBeatles – Tuesday 6 September Get yours from our website ➡️ orlo.uk/l1FL4 pic.twitter.com/VfydhFDs7y